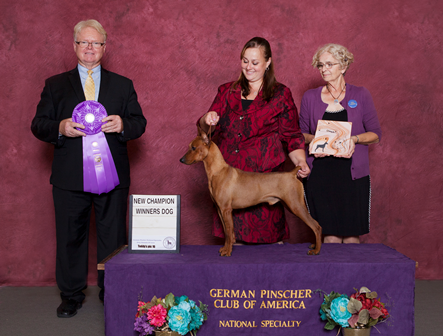 Walker is the coolest German Pinscher ever!  He is Jagger’s nephew and has blown my mind.  This puppy was shown agains other GPs for the first time at the end of August 2016 and in his first weekend he took back to back 5 point majors.  His second weekend he had back to back reserves to the 5 point major.  There was a part of me that was sad he didn’t finish in two weekends, but it allowed me to save him for the GP National in September.  My boy did not disappoint.  He was Winner’s Dog under Mr. Bill Shelton at the national and then the next day as a move up he was the first award of merit at the supported entry over 16 other specials.  He was also BOSSweeps that day.  This pup is personality plus!  He loves everything he meets.  To sweeten the deal, he exudes type.  Walker moves with a perfectly level topline, balanced front to rear, clean coming and going, and he has a head piece to die for.  He loves to swim and is actually swimming faster than my goldens!   We nicknamed him “Lifeguard” over the summer 🙂

Walker is neutered and sleeps on his uncle, Jagger.